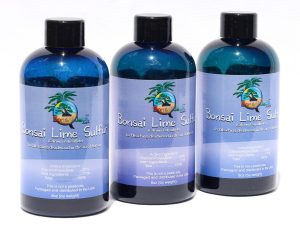 What is Lime Sulfur and how is it used in Bonsai?

Ahhh, the stinky stuff everyone hates using. But we all love
the result.

Lime Sulfur has been in use for about 100 years. Remote farmers didn’t have access to a local home improvement store in the early 1900’s. These farmers and Coop’s were able to produce this product in a rapid fashion for little money. Lime Sulfur was used as a pesticide then as it is today. Many lime sulfur grade insecticides can still be found today by visiting your local hardware store.

Lime / Sulfur, at its core, is just that. The two ingredients are blended and cooked together for a certain period of time. The end result is an amber color liquid with a foul odor. Other ingredients such as arsenate of lead and nicotine are added to create insecticide grade lime sulfur. The addition of these ingredients broadens the line of insects it can control. This type of lime sulfur is designed to kill insects and control fungus and it does a very good job of doing that.

Lime sulfur is also used to bleach deadwood in the art of bonsai. Its applied to the deadwood to give it a distinctive color, often contrasting the living wood.

Most people would prefer to avoid added ingredients that can harm a plant. Nicotine for example can stunt the growth of many species.

Our Bonsai Lime Sulfur is created using four ingredients. Lime, Sulfur, water and a specific type of wood ash. I personally prepare every 5 gallon batch. Nothing else is added to our Bonsai grade lime sulfur. Its designed specifically for bleaching deadwood in the art of bonsai. Our mix is proprietary and is a result of many batch tests over a years time. It will out bleach any lime sulfur product available today guaranteed or your money back.

Our products is also filtered using a 70 mesh screen. We have all seen it. The lime sulfur with sediment in the bottom. During production of some products the bottom 10-25 percent of a batch is sediment. This sediment is unprocessed lime and sulfur that has not bonded. The amount of sediment in your bottle from an unfiltered batch depends on what order your bottle was filled. The later bottles will contain more sediment, the earlier bottles will contain less as its coming form the top of the batch. This is why you can order two bottles from Japan and one will have severe sediment and another has none.

You will not have this sediment problem with BonsaiJack Lime Sulfur. Our bottles are consistent. The first bottle will have the same clarity as the last. The sediment is filtered out, dried and used in future batches. This compounds the strength of our product. Nothing goes to waste.

Is our product safe for foliage and roots? No. Its always best to avoid root and foliage contact as best you can. If and when the soil or foliage does come into contact with the product there is less chance it will cause damage when compared to the insecticide grade product. We do not have the added chemicals such as arsenate of lead or nicotine.

Our product consists of superior core ingredients. I wont get into too much detail but its safe to say that we buy in bulk but not the cheap stuff.

We are not the only producer of lime sulfur. Many other companies offer great lime sulfur products. Avoid products labeled as a pesticide or repackaged pesticides. Don’t be afraid to ask what’s in it. The MSDS and label should be readily available from the vendors website. IMO its best to avoid India and China based lime sulfur products.

Here is an example of a piece of driftwood that will be bleached, carved, sealed and used for a phoenix graft with a Brazilian Raintree.

I hope this article cuts through the clutter. Its not technically detailed but will give you an idea of our view of Bonsai Lime Sulfur.

To recap:
Our bonsai lime sulfur is designed specifically for bleaching deadwood in the art of bonsai. Its produced with top grade ingredients, filtered and bottled
right here in Florida, USA. This ensures you have a fresh order that has not been sitting on a shelf for three years before reaching you. Its not a repacked pesticide. It offers superior bleaching action.

Thanks for reading. Feedback is encouraged.